At our math website we publish printable PDF worksheets for school children. We’ve just started publishing crosswords, while relatively easy to create, they require much work to make them into tasks.

A workflow consists of multiple, repetitive tasks, which could be automated. And that’s what I’m doing with LibreOffice. I’m using LibreOffice as it’s more updated than OpenOffice. Even though they have a lot in common, LibreOffice just feels more right for C++ code than OpenOffice.

This post is the first in a series of LibreOffice C++ tutorials on how to integrate and use LibreOffice with C++.

The first step in integrating LibreOffice into C++, is having both the LibreOffice suite installed and the SDK. I’ll be covering Windows in this guide, as it’s more difficult to get started with than on various Linux distributions.

Head over to https://www.libreoffice.org/download/libreoffice-fresh/ and download the latest release and SDK. Both should be available at that page.

Contrary to regular C++ libraries, the LibreOffice SDK doesn’t come with all headers. In fact, most of the headers have to be generated by a tool calledcppumaker. It’s difficult tool to get started with, as it have some requirements and assumptions whose are not very well documented by the program itself.

Most issues can be solved by looking at the error messages, some searching online and some experimenting. Here I’ll outline most of the errors I encountered.

The bridge between a language and LibreOffice itself is called UNO.

Create a staging directory for cppumaker

As most people, I don’t like to work directly with system wide files when developing and experimenting with things just like this. Sadly cppumaker sort of requires to be able to place files directly in the installation folder to the SDK.

We’re still going to create a staging directory, just for the extra challenge.

Create a staging directory somewhere. Where is not important. Create a script called make_cpp_types.bat in that folder. The output directory out doesn’t have to exist. It will be created automatically by cppumaker.

Most of the time I make scripts when doing complex operations on the Windows command line. This is no exception. It’s easier to just restart the script, than to manually enter PATH environment variables every time you accidentally wipe the PATH variable or close the command line window.

With the LibreOffice SDK, there are a couple of items in various folders. The program cppumaker is in one folder, while it’s dependencies are in an other directory, while the RDB are in some other folders. It’s a mess to fiddle with manually on the command line.

Here is the beginning of a batch script gathering the pieces together.

At this point, all we’ve done is to modify the PATH variable to contain the path to cppumaker and it’s dependencies. This is to be able to run cppumaker.

Next up is making variables for the three databases to generate types from. Those are types.rdb, offapi.rdb and oovbaapi.rdb.

The final command is calling cppumaker with the correct parameters. It is very picky about the parameters, so be careful.

With the variables from above, calling cppumaker will look like this.

When the script is done running, there should be a bunch of other files and folders. Copy those files back to the SDK directory, keeping the same directory structure, or adjust the script so the staging directory points to the SDK include directory and run the script as administator.

For the lazy, the stage directory for non-staging is:

The final script should look something like this, adjusted for your paths.

It’s not trivially easy to make this program generate the headers, and there are many pitfalls getting it just right. And it has to be just right.

If you get messageboxes saying that either sal3.dll, salhelper3MSC.dll and/or unoidllo.dll are missing, the PATH variable isn’t set properly. It has to contain the LibreOffice program directory for the DLLs to be found.

ERROR: No such file

The error ERROR: No such file is because there is a slash at the end of the output path. Remove the slash and try again.

You are trying to write to the installation directory, for which you need administrator privileges. Run the script as administrator and try again.

The file types.rdb is not provided on the command line, only the file offapi.rdb. Provide both and try again.

Same as above, but only with oovbaapi.rdb. The file types.rdb must be provided on the command line to cppumaker.

Up until now the article have been about just getting the headers to work. Actually using the headers is something else. But before that, Visual Studio must know where to locate the headers. 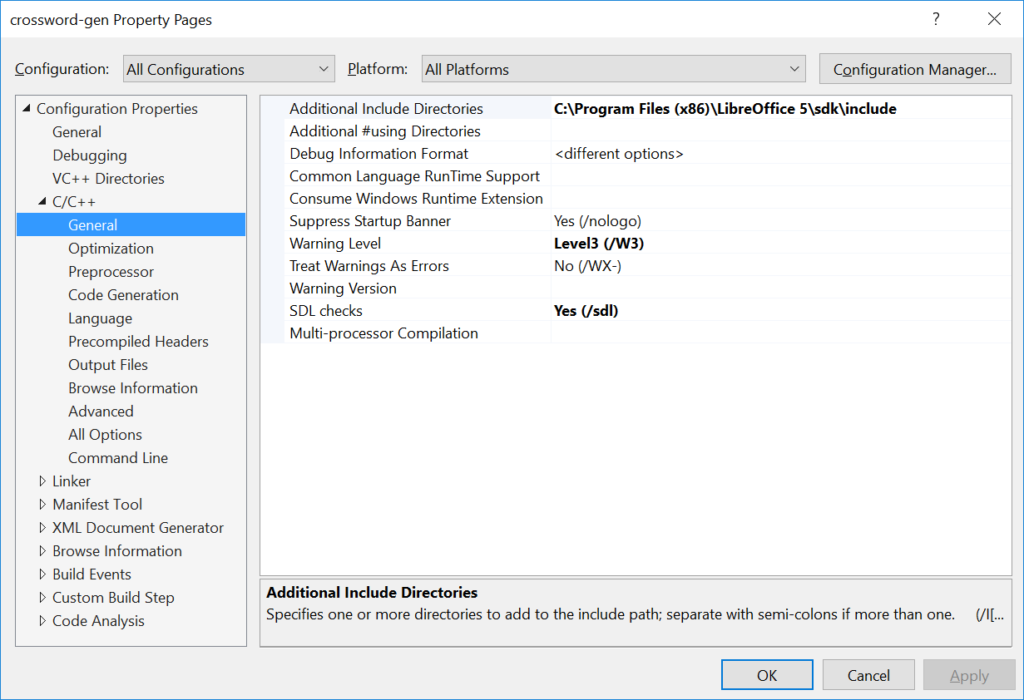 If properly done, then this code should compile.

If anything is missing, the compiler will tell you about it.

This concludes this article about getting started with integrating LibreOffice SDK into C++ and Visual Studio. Next is about actually doing integration work and what errors you may encounter in the process.

How to create new C++ project in Visual Studio 2017